An Update From the Blakeslee Lab 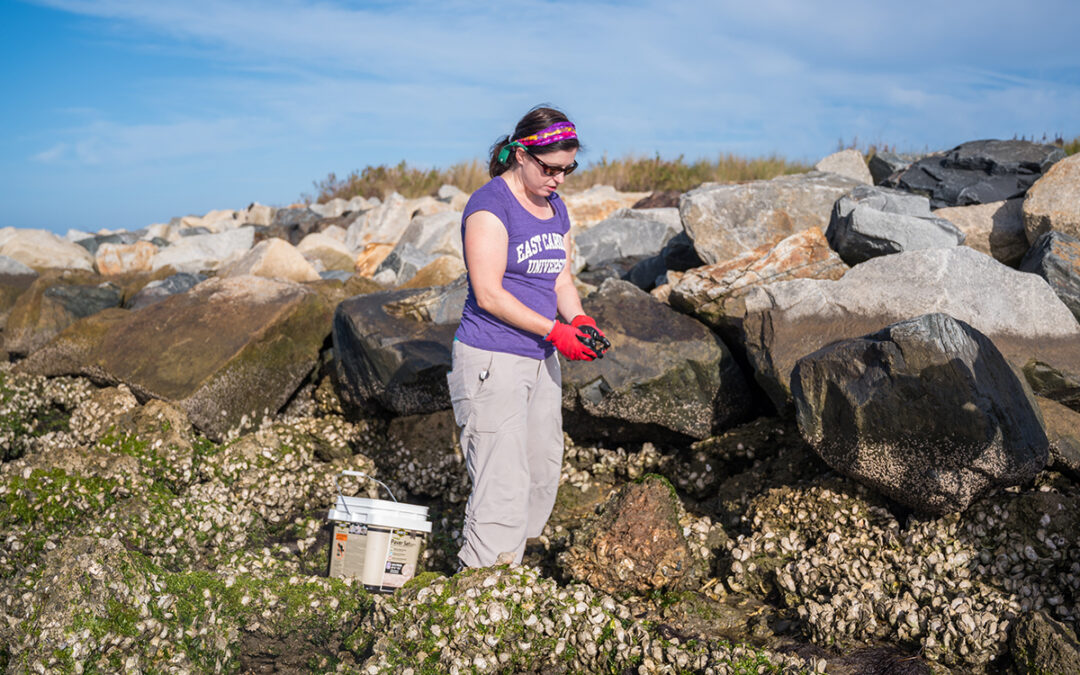 Each species on earth fills an ecological niche. In other words, every single species has its own role and native range which allow it to contribute to the balance of the ecosystem in which it is found. But what happens when a particular species is found outside its native area? It is then referred to as a non-native species and is sometimes even deemed invasive, meaning it has begun to take over new territory, perhaps even to the detriment of other species. As Dr. April Blakeslee mentioned in her Meet the Scientist debut, the lionfish is the posterchild for non-native, invasive species, however she researches lesser thought of coastal organisms- crabs! 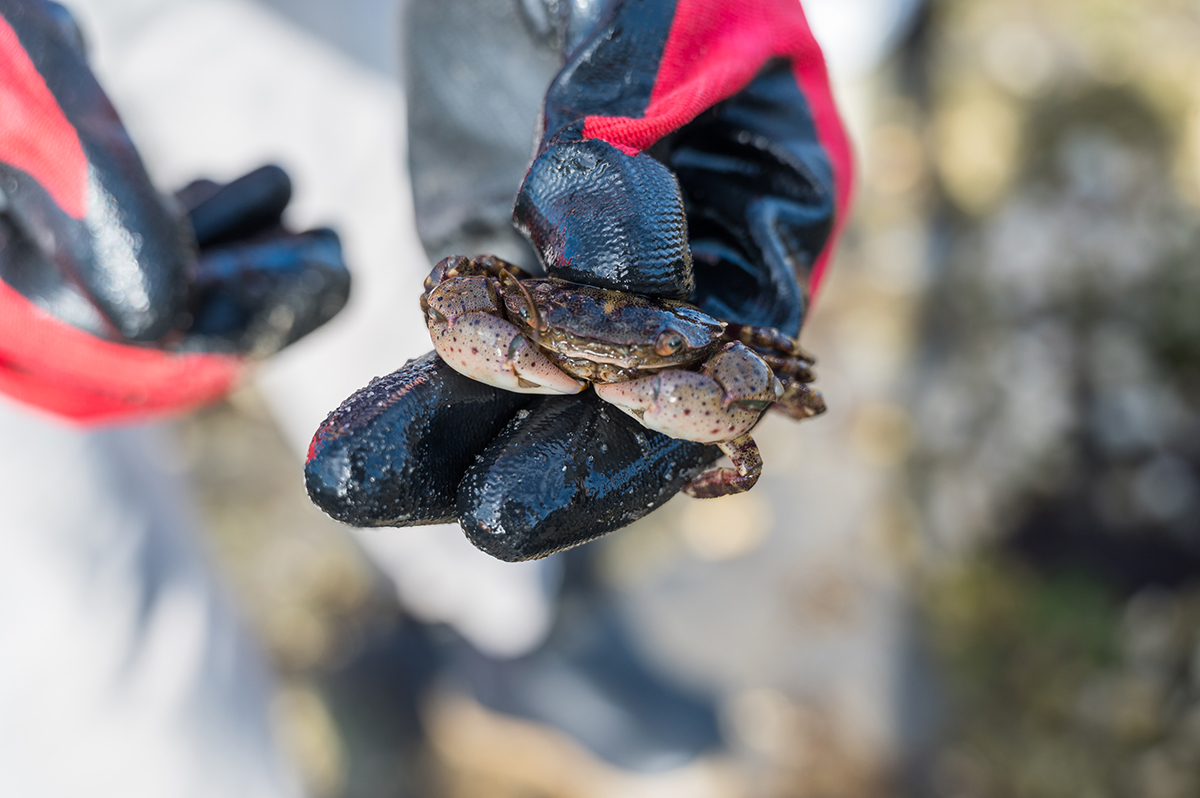 Some of Blakeslee’s original work focused on an invasive species known as the Asian shore crab (Hemigrapsus sanguineus, left), and she’s currently revisiting this species in her newest research endeavor. This invasive species first appeared in the United States in 1988. The best guess as to how the species arrived on our shores is via ballast water from ships traveling from Asia to North America prior to heavier regulations on ballast exchange

procedures. It’s believed that the species was first introduced in the busy ports of the mid-Atlantic, however, the species is now found from mid-coast Maine to as far south as North Carolina. The Asian shore crab’s non-native range likely expanded due to multiple introductions of the species from Asia to the North American coast, as well as through larval dispersal along the Atlantic coast. While ballast water exchange is now regulated for vessels coming to the coast from international waters, there is still occasional non-compliance, and it’s also generally not a requirement for ships that travel from port to port within the States. Furthermore, the Asian shore crab prefers rocky substrate, and Blakeslee and others hypothesize that the species’ spread could have been facilitated by the use of rip rap for marine construction.

Enter the southern-most known existence of the Asian shore crab in the U.S. – the Pea Island Life Saving Station at Oregon Inlet. The jetty at this field site (photo below) is one that Blakeslee has visited frequently while working on this project. She and her colleagues are conducting a biogeographic study across the U.S. range of the shore crab with other sites in Delaware, New Jersey, Connecticut, New Hampshire, and Maine (northern-most range). 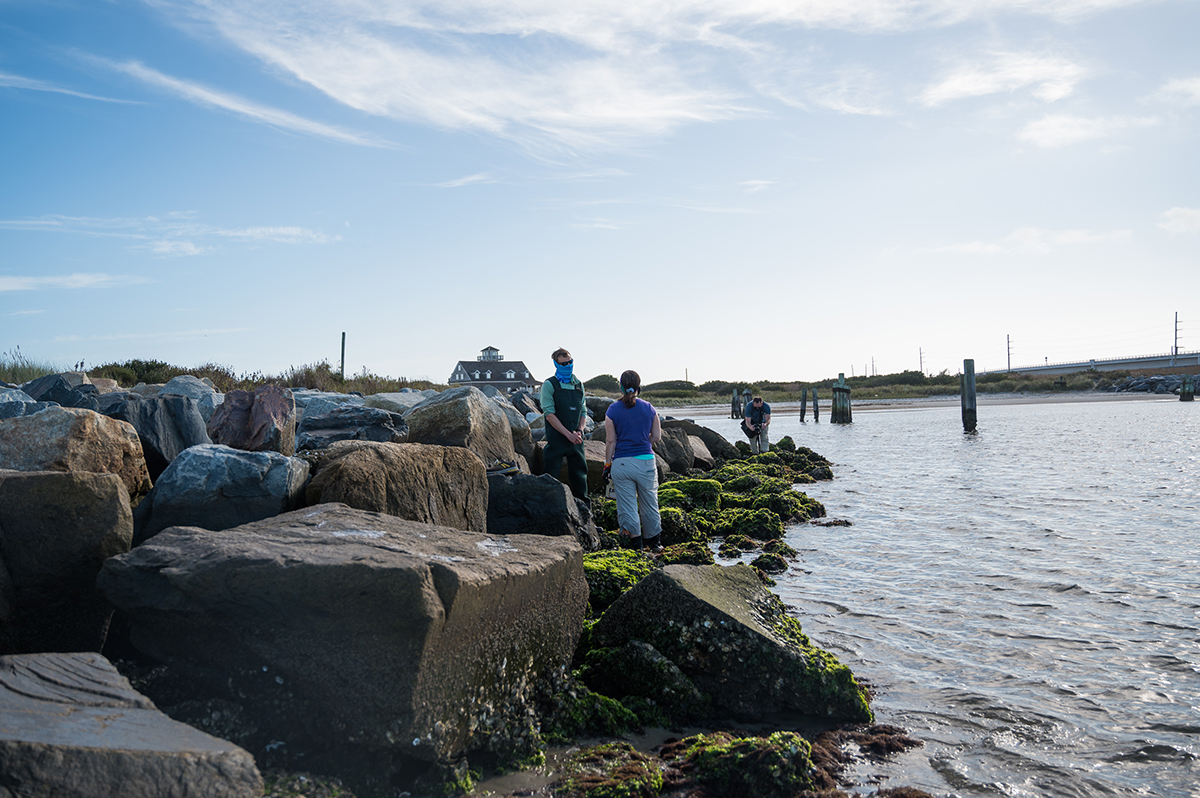 Being at the southern edge of the range, Blakeslee and colleagues wonder if the Asian shore crab might show different tolerances, reproductive onset/output, and behaviors to a variety of environmental factors, such as temperature, salinity, species competition, and parasite presence, when compared to the populations in the middle of its North American range.

She explains, “Presently, we’re wanting to expand our understanding of parasite diversity in the crab’s invasive range here. We didn’t have any crabs from the southern part of its range in our past work, so the Oregon Inlet site will be an interesting new site to compare to both our past work and the other sites we’re obtaining data on this year.” Her work for this study will be to discover what species of parasites use the shore crabs as a host and how those species might affect the Asian shore crab populations at the study sites.

Blakeslee and her colleagues began this study in Winter 2020 and concluded sampling in Fall 2020. Their data analysis is ongoing. In addition, Blakeslee intends to continue researching the crabs at the Oregon Inlet site for temperature tolerance, population genetics, and parasites in the future.