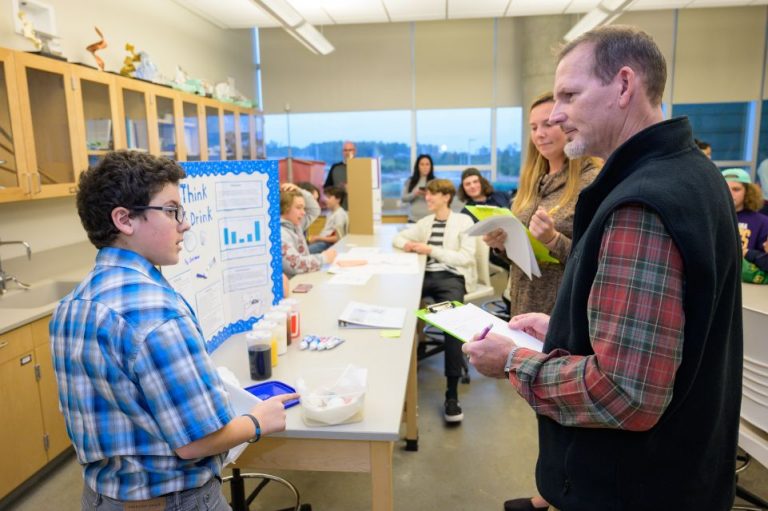 One of CSI’s Public Education and Outreach objectives is to get kids excited about science and to help them understand the scientific process. For the last three years, CSI and a variety of partners have done just that, and this year has only proven to be better. CSI, in conjunction with Jennette’s Pier, held their annual science fair on January 14th.  This year, registration was not just limited to Dare County. Elementary to high school-aged students from surrounding northeastern North Carolina counties were also invited to participate.

This year’s science fair featured eco surf wax, a solar oven, and a soda-powered skateboard. There were also students that tested different paper airplane designs, some who analyzed whether dogs were right or left-pawed, and even others who built replicas of their design ideas. Each of the projects entered demonstrated a basic understanding of biology, earth and environmental sciences, physics, chemistry, or engineering, and was reviewed by at least two of eight volunteer judges. Faculty, staff, and members of the public also stopped by to see the students present their projects.

CSI and Jennette’s Pier were excited to award seven students prizes donated by local businesses. First place went to 2019 reigning champion, Maili McManus who presented “A Comparison of Renewable Energies.” Abby Edwards and Alexa Hallac received the second-place award for their project, “Motored Car Mechanics!”, and the third-place prize went to Eli Lawrenson, Finnegan Davis, and Avery Hogan who did an “Air Vacuum Experiment.” Finally, the youngest competitor of the night, second-grader Hillary Simpson was awarded Judges Choice for her experiment entitled “Candle Burn Rates.” Her enthusiasm for science was evident with a cartoon drawing of herself exclaiming “Yayyy!” for science and her third finding which stated, “Science is the funnest thing ever.”

CSI and Jennette’s Pier would like to extend thanks to each participant who came to showcase their project, as well as the community members who served as judges and the local businesses that donated food and prizes. This event would not have been possible without the support of so many.