Due to a change in their international travel plans for spring break, students from the ECU School of Art and Design (SoAD) recently found themselves on the ECU Outer Banks Campus. Though one usually thinks of science-related content when they visit CSI, these students were here for an art class! The honors course, UAE: Field Studies in Art and Design, was comprised of students from many different concentrations including graphic design, film, photography, printmaking, and animation; and there was even one biologist who was not an art major. The spring semester course, which began in January, was originally designed to prepare students for an interdisciplinary trip over spring break to the United Arab Emirates to participate in activities at partner institutions and visit museums, galleries, and other sites in the UAE. The course also planned to have ECU students meet and collaborate with UAE students during their visit. Prior to the planned trip, the UAE and ECU students would use online collaborative tools including a weekly videoconference and interactive social media platforms like WhatsApp. Professor Matt Egan explains, “The collaboration and course, in general, has been a project of sorts we have been working on for the past six years, bringing three groups of students from the University of Sharjah to ECU’s campus and four groups in as many years to the UAE. The studio has been a great place to collaborate and get to know each other and about each other’s cultures.” 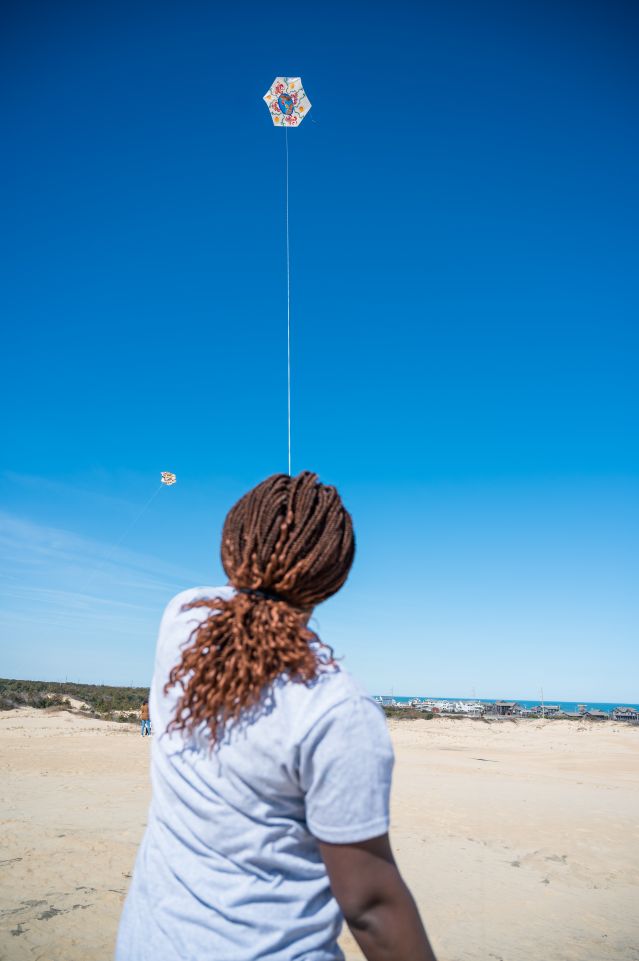 A theme of the course was connection, which in this case was found through the study of printmaking and, oddly enough, kites. As Egan put it, they were “considering ideas connecting east and west, land and sky and generally connecting with each other”. Chloe Baylor, a SoAD animation student, explained that she felt she had made connections with her classmates near and far through organizing course logistics such as timing and communicating, as well as through collaborating on print designs for the kites that would be a final project for the course.  Baylor mentioned she really appreciated the sense of community the class had fostered and talked specifically about how she and some of the other art students helped biology student Nitika Jane with printmaking since Jane was completely new to the art and they wanted her to have the best experience possible. “We encouraged her to do screen printing because it was a little easier and we wanted her to have options. We showed her the different types of printing and said ‘This is what this looks like. This is about how long this takes. This is how much manual labor you will have to put into this one. These might be your better options.’”, said Baylor.

Beyond the classroom and studio community connections, both Baylor and Jane exhibited concepts of connection on their kites. Baylor was excited because the course offered a way to “take art and put it into the world rather than a gallery”, and she created a piece that connected her with the students and people of UAE. Her kite featured images of the eyes of Emirati women, as well as close-up images of the clothing details from her friends and classmates in Abu Dhabi and Dubai. The images were printed on the kite paper in purple and gold to represent ECU. Jane, who originally chose the course because she was born in UAE and had not been able to return since, was inspired by her studies and the “tiniest thing that connects us all” – DNA. Her kite also featured henna designs, which she was inspired to create because Mehndi, the art form which uses henna, is a practice that both she and her mother enjoy together.

Unfortunately, to take precautions against the spread of coronavirus, the class was unable to travel when the time came. Though all were disappointed, Egan was quickly able to plan a new trip. Egan, whose hobby is kite surfing, was familiar with the Outer Banks and was able to arrange an extended-weekend visit to the area in hopes of emulating their plans to fly their kites on the beach in UAE. Their visit included time to work on their final designs and kite-building, a trip to Salvo, a tour of CSI and the OBX campus, and kite-flying at Jockey’s Ridge. The students came with their many of their prints already produced since they could not travel with all their equipment. However, since a trip to the Outer Banks rather than UAE did allow for more flexibility, the students were able to take advantage of the space in the design lab here at CSI on Saturday. Egan remarked on the beauty of the ECU OBX Campus, “The view of the sound, the sunset and facilities are all beautiful. We felt very privileged to work in the building and felt connected to the environment because of it. It didn’t take long to feel at home. The labs quickly felt akin to the studio, a space one could easily imagine collaborating in.” Though the students were sad they could not be with their UAE friends, their trip to Jockey’s Ridge on Monday was still full of laughter as they were challenged to get each of their own kites up in the air and often found themselves dodging the kites of others. Each personally and beautifully made kite was exhibited in the air for all in the area to see. While there was certainly a physical impact zone as the kites came down, it was also very evident, despite the change of plans, that these students had impacted each other over the duration of the course and their trip to the Outer Banks. 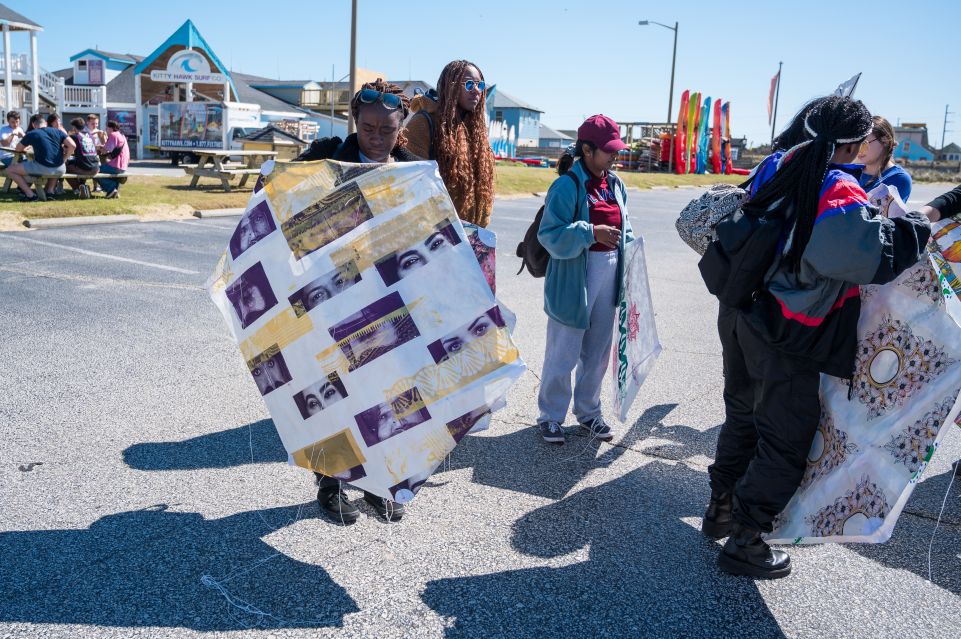 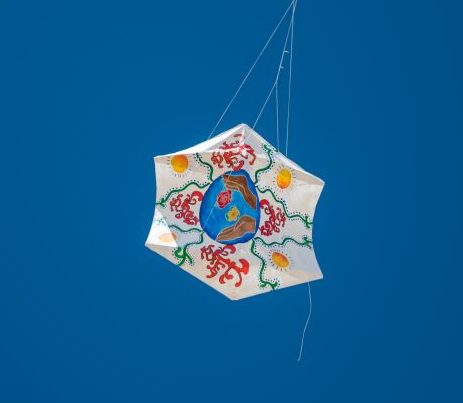 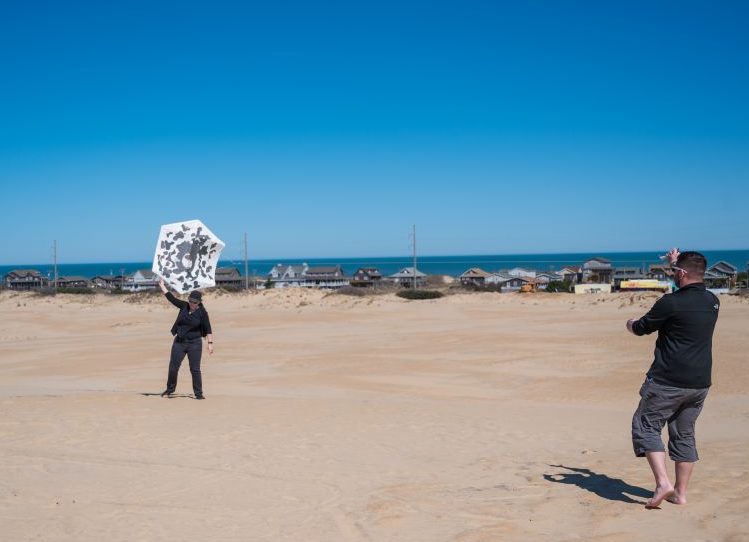 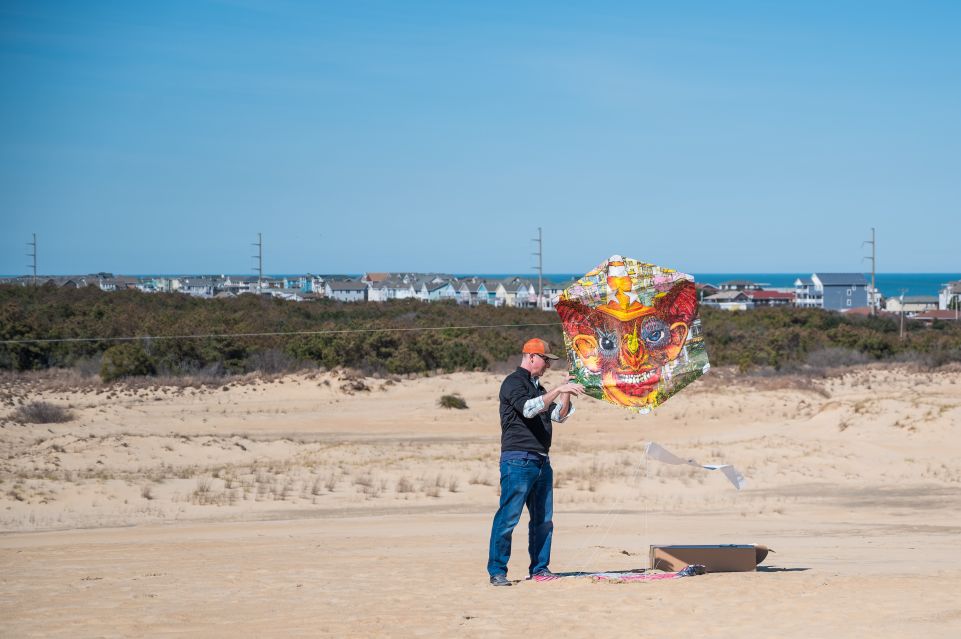 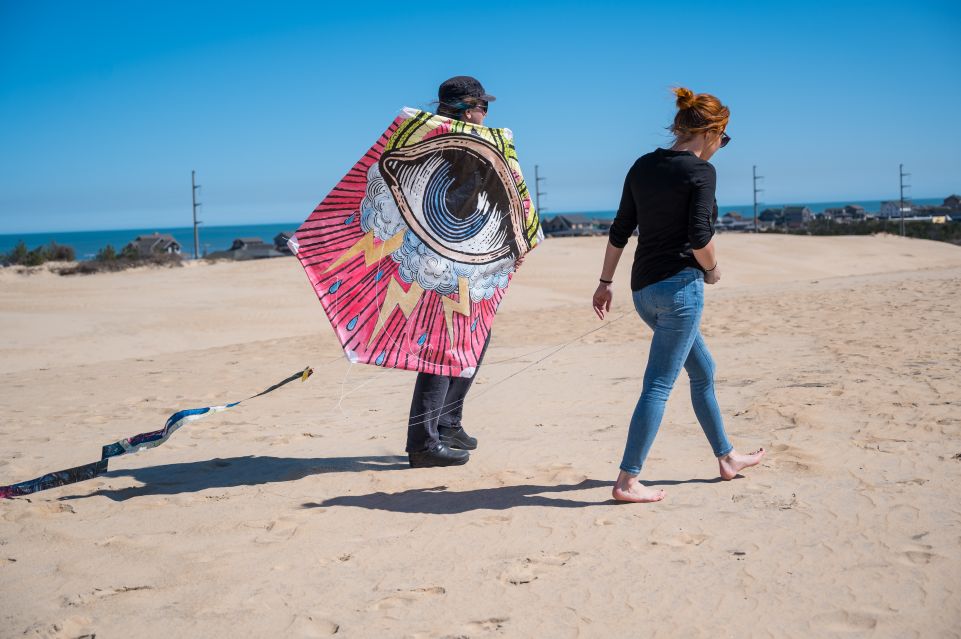