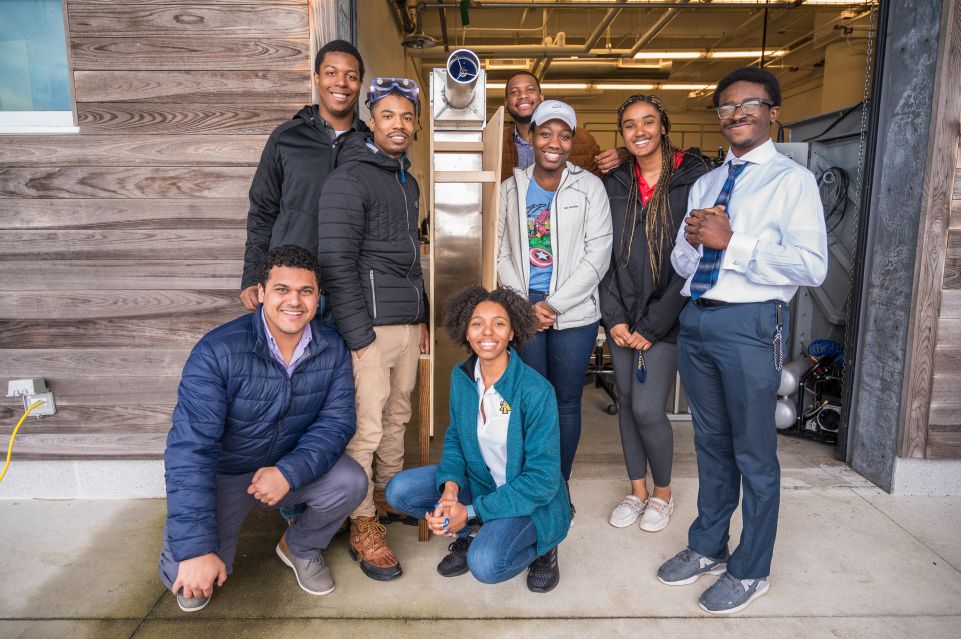 On February 25, 15 mechanical engineering students from North Carolina Agricultural and Technical State University (NCA&T), visited the ECU Outer Banks Campus to put their oscillating wave column to the test in CSI’s wave tank. The students are part of Dr. Michael Atkinson’s Ocean Energy Senior Design course, a new class offering at NCA&T that began in 2018. Atkinson is an assistant professor of mechanical engineering at NCA&T where he leads the Aerospace Option program, and in the last two years, he has expanded his interests to include ocean renewable energy. Murphy Gay, a student of Atkinson’s, explained that the oscillating wave column was their design of choice because it has been one of the most documented types of wave energy devices.

Before arriving, the students put in many hours of research and designed a prototype. Their device was originally made of only wood, epoxy, and tape; but it was later redesigned so that it could be assembled via 3D printer and tested in a small wave tank (6 cm wide x 120 cm deep) at NCA&T. Once they got past the small-scale testing phase, the students researched more robust material options, such as aluminum, that could withstand larger-scale testing. Gay described the whole process as “organized chaos.”

Their visit to CSI marked their first time testing on a large scale. Their design, an oscillating wave column, is meant to convert wave energy to electricity. As the waves rise and fall, air is forced into a column that drives a small wind turbine. As the turbine rotates, it generates electrical energy. After constructing their device upon arrival, the students set and re-set the wave tank parameters including wave height, period, and seed to simulate both “uniform” and “random” wave conditions, the latter reflecting the more erratic ocean behavior of tropical storms and hurricanes.

While the long-term goal is to create a device that could eventually be used to produce grid-scale energy, the students also have some other smaller goals in mind. Brown explains, “we are hoping to achieve some sort of efficiency for the device. It would be nice if we could beat last year’s team which had about .01% efficiency. But really it would be great to just generate electricity and add to the information that is out there on oscillating wave columns because the more people test on it, the more data we have available and the better that everyone else can make future prototypes.” Another student, Annie McPherson acknowledged that while grid-scale energy may be tough to produce, they could likely start “small” to build a working, efficient device as an aid for disaster relief. Their hope is that it could be an “in the field, on the ground” charging station for rovers and other robotic technology which help with disaster response. However, before they can get to that point, there is an arduous road of data collection and design tweaking, and by visiting CSI, they were able to move a little further along the path.

The students were mostly hoping their design could simply work and from there they could then address issues of efficiency. Unfortunately, their first round of testing did not go as they hoped and the small turbine in their machine did not work. Issues with their design lead to a lack of wind power to turn the turbine. Gay believes part of the reason their design first failed is because “the amount of energy that is available in the water or wave as it approaches is greater in the small tank, because the height difference is so small. We are learning that the deeper we go, the less energy there is in the wave. With our wave tank, it didn’t matter how deep we put it because we only were dealing with a maximum depth of 120 cm, but with the CSI wave tank, if we put it too deep, the energy of the wave starts to dissipate.” However, they were not discouraged and set out to problem solve and redesign their prototype.

As they were working, Atkinson remarked how excited and proud he was of them, even if they did not succeed at all during their first rounds of large-scale testing. He stated, “We’ve learned so much this semester. Successes and failures. And that is one thing I try to instill in my students, that ‘you may design something, and you think it is going to work out perfectly. But when you actually put it out there, it doesn’t work the way you want it to. But that is not a failure. You are still a step closer. Now you know this did not work.’ … In just one day, even each hour, we have learned something new. Each step, whether it is a success or a failure, we have learned something… and we can build upon it.”

Two key themes of the students’ work towards the most efficient design are documentation and adaptation. With each step of researching, building, and testing, the students meticulously document what they have learned and the changes that need to be made to make progress. Not only will this help Atkinson’s future classes, and maybe even other scientists, it became a real-life example of the adage, “hard work pays off.” After redesigning a portion of their column to better accommodate for the depth of the wave tank, the students finally found success and were able to generate measurable electricity. The room erupted with cheers and hollers as the turbine began to spin, and all watched in amazement. While their success was a small step in the long road to renewable ocean energy, these student innovators had their biggest success yet, and that was something to be proud of.

After a long day of testing, the class returned back to NCA&T. However, it is not the end of the story for them. They will come back to CSI on March 21 for the North Carolina Renewable Energy Challenge, and after they graduate will compete in a National Renewable Energy Lab competition in Washington, DC this May. Hopefully, each of these events will provide them with additional learning opportunities, successes, and even better ideas for the future of renewable energy.