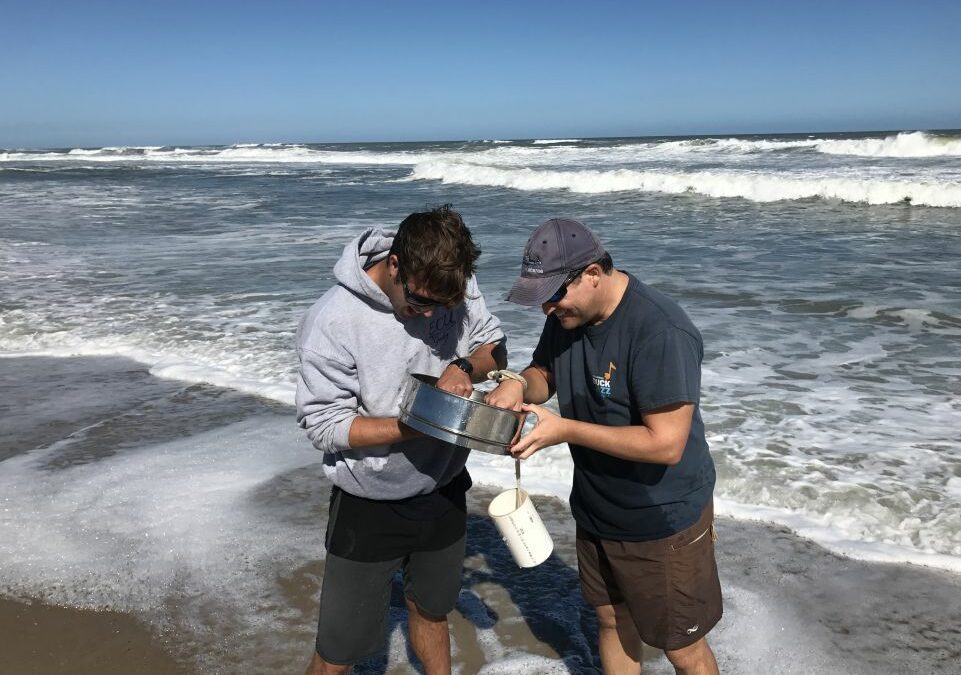 Beach nourishment projects are no stranger to Outer Banks beaches which have experienced net erosion without human intervention. State regulations prohibit hard structure mitigation installments such as sea walls, bulkheads, and sandbags on the oceanfront leaving few viable options for response to erosion. Many believe nourishment is a better tactic to combat erosion because its environmental impacts appear to be low and relatively short-term; however, others are not as sure. While there is evidence for both sides of the argument, beach nourishment studies to date have only taken place on the time scale of a few days up to two years post-nourishment, thus the results are likely inconclusive.

That is where Dean & Executive Director Dr. Reide Corbett and Research Scientist Dr. Paul Paris, both of the Coastal Studies Institute on the ECU Outer Banks Campus, come into play. Says Corbett, “Beach nourishment is one of the few methods NC has to try and slow the impact of shoreline change.  Adding sand to the beach doesn’t stop it from eroding, but essentially buys some time and allows the process to continue without impacting property further inland.  However, we have little information on the long-term impact this soft-engineering solution might have on the biological and physical process of the beach.  We are trying to help address this gap in our understanding.” With funding from US Fish and Wildlife Service (USFWS) and US Coastal Research Program through the US Army Corps of Engineers, they are currently studying the effects of the 2014 beach nourishment project on Pea Island National Wildlife Refuge (PINWR). Their study, which began in Fall 2019, builds upon Corbett and former Coastal Processes co-program head Dr. JP Walsh’s previous work on the 2014 nourishment project for the two years following the project’s completion. Corbett and Paris will complete four different field surveys of nourished and non-nourished, or reference, areas at the southern end of PINWR between Winter 2020 and Spring 2021. The last survey will nearly coincide with the 7-year anniversary of the 2014 nourishment project. 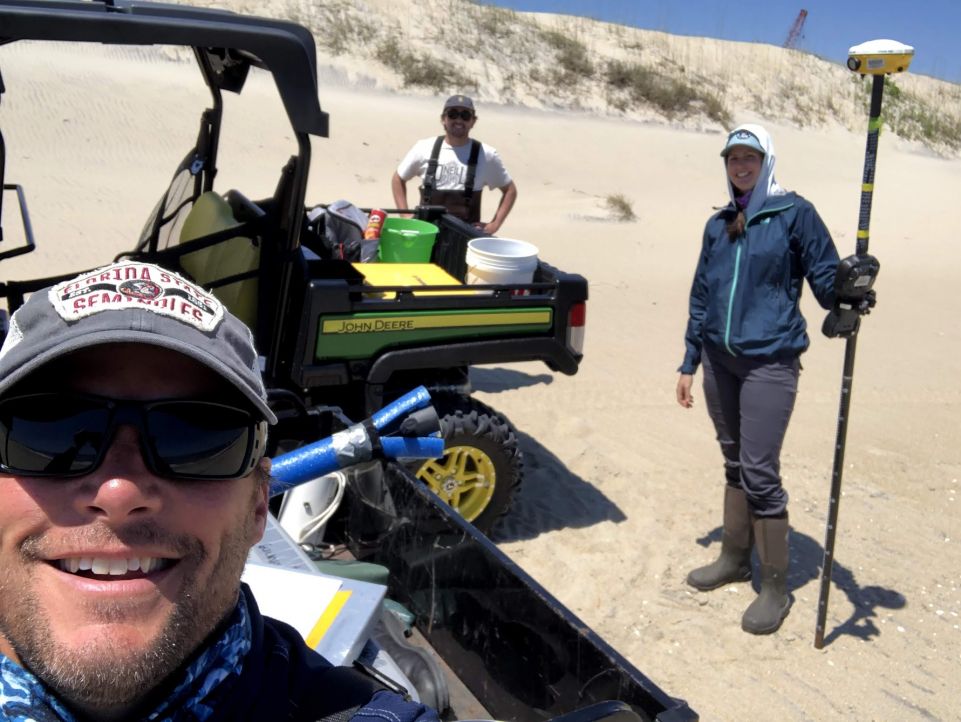 Over the course of this new study, Corbett and Paris are seeking to understand the longer-term effects of the 2014 nourishment project. To do so, they and their research team will collect data from the field surveys and take sand samples back to the lab to be processed. In addition to collecting sand samples on the beach, they will randomly select small plots near sand collection sites to estimate the presence and abundance of ghost crabs. In the swash zone, they will also collect, assess, and then release live samples to be sieved and counted for all macro-organisms which could include mole crabs, coquina, amphipods, and polychaete worms. Beach geomorphology, including the elevation and slope of the beach, will also be recorded using a field GPS device. Other on-site measures will also be conducted, including, but not limited to sediment compaction, tide stage, and air and water temperature. In the lab, the researchers will analyze the sand grain size and heavy mineral content. 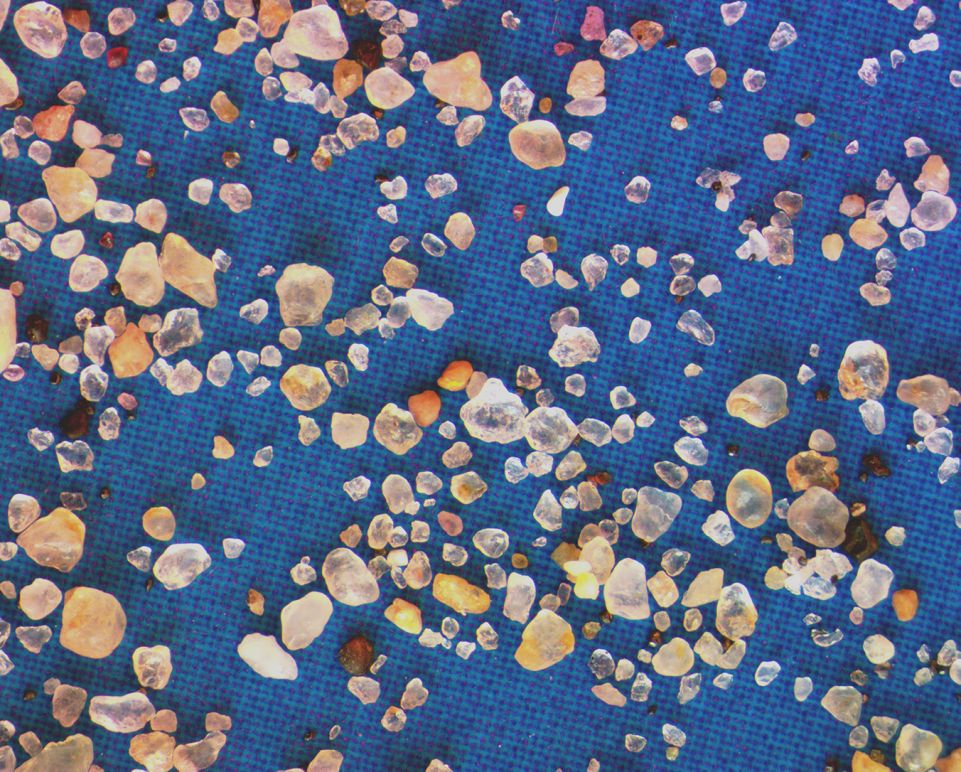 The data mentioned above, combined with USFWS records for sea turtle and shorebird nesting populations, will help the researchers to record the long-term effects of a beach nourishment project. Corbett elaborates, “We are interested in the possible influence of nourishment on physical aspects of the beach, as well as long-term biological changes.  Changes in grain size can influence the “critters” living in the surf zone which might impact foraging birds, while changes in beach slope may alter sea turtle nesting.” Up to this point, studies were short-term and did not extend the estimated lifespan of a typical beach nourishment project which is usually 5-10 years. The ongoing study conducted by Corbett and Paris will end with results that rest within the 5 to 10-year threshold. Hopefully, their study will yield more conclusive results and shed light on the uncertainty associated with such projects regarding their physical and biotic affects. The study also has the potential to inform future municipal and environmental management decisions. Corbett believes PINWR is an exemplary study site, stating there “aren’t many places around the world where there is little anthropogenic [human-induced] change to the beach except a single nourishment.  The PINWR is really unique and offers a great place to study the impact of nourishment.”

Corbett and Paris expect their study to wrap-up in Fall 2021, and members of the public can anticipate learning more in the meantime at an upcoming Science on the Sound lecture at CSI in Fall 2020 or Spring 2021.